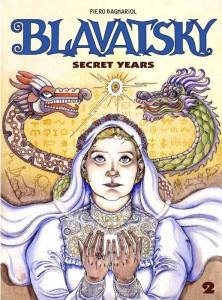 Secret Years is a graphic biography which combines elements of Vladimir Propp’s Morphology of the Folktalewith a meticulous research of Blavatsky’s biographies and refers to the numerous works written by her, esoteric or not, full of interesting and amusing anecdotes. The dates and episodes depicted, barring some narrative expedients, are accurate and embrace, in particular, that dark and deliberately confusing period of her personal history, known as ‘the veiled years’. Narrated by Vera Jelihovsky, Helena’s sister, the story covers the period of her birth in 1831 to the year 1871, shortly before her appearance in the United States, where she became a public figure with the foundation of the Theosophical Society and the publication of her first book, Isis Unveiled (1877).

Helena Petrovna Blavatsky (1831-1891) was one of the most enigmatic personalities of the 19th century. A writer, thinker and traveler, she pioneered the search for the philosophies and esoterism of the Eastern world. Intrepid, eccentric and provocative, her contempt for social conventions and her defense of the traditions of peoples subjected to Western culture during British colonization, like the Hindus, brought her vehement attacks from the Victorian-age media as her influence and notoriety increased around the world. At the end of her life, she was discredited “as one of the most accomplished, ingenious, and interesting impostors in history.” Despite this, she influenced thinkers and artists such as W. B. Yeats, Gandhi, Rudolf Steiner and Kandinsky.

This biography in comics is intended to be an invitation to read the works of this complex and current writer. And for young people in particular, it’s an encouragement to enjoy an intense existence, animated by an ardent interest in unraveling the wonders of nature. As did H. P. Blavatsky.

Piero Bagnariol was born in Italy and came to Brazil at the age of twenty, in 1992. A comic artist and graffiti artist, he is one of the founders of the comics magazine Grafitti 76%, which he has edited since 1995, and author of Um dia uma morte, with Fabiano Barroso , Guia ilustrado de graffiti e quadrinhos, with other collaborators. In partnership with his father, the physician Giuseppe Bagnariol, a great connoisseur of ‎Divine Comedy, embraced the challenge of transposing Dante Alighieri’s work into comics, published in 2011 by the Classics in Comics collection. Later, with Tereza Virgínia Barbosa, he started¬ translating into images the Greek classical works, such as Homer’s Odyssey, which came out on the same collection. Recently, he published Secret years, biophantasy in comics about the first phase of Helena Petrovna Blavatsky’s life (1831-1891), and prepares for soon the Euripedes tragedy Orestes (408 BC).